MPs and their degrees: here's where and what our UK politicians studied

13th December 2019 For immediate release: The UK General Election on 12th December 2019 saw a landslide victory for the Conservative Party and a huge change in the makeup of the House of Commons.

Studee.com reveals the undergraduate education of the new government, and how it compares to the one that came before.

How many MPs attended university?

Our findings show the overall number of MPs who attended university has gone down slightly following the election. Before the election, 86% of MPs had gone to university, but this has now dropped to 85%. There are now 99 MPs who have not had a university education, showing you don’t have to be a graduate to gain a place in the House of Commons.

The number of MPs who didn’t go to university;

Percentage of MPs who went to university; 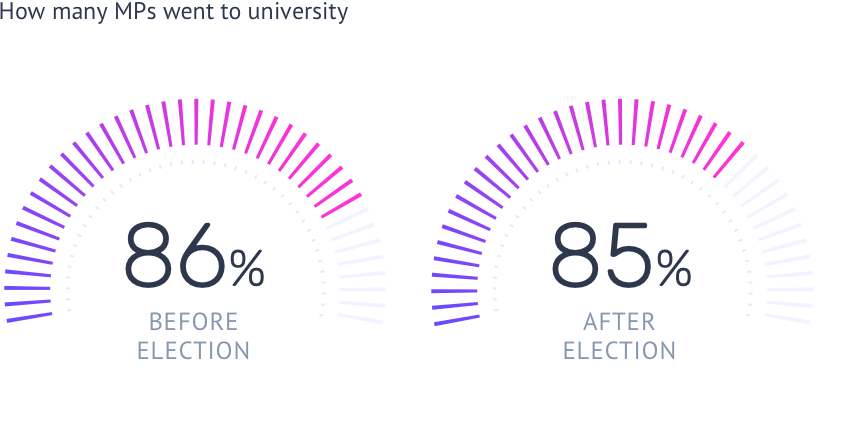 Did more male or female MPs go to university? 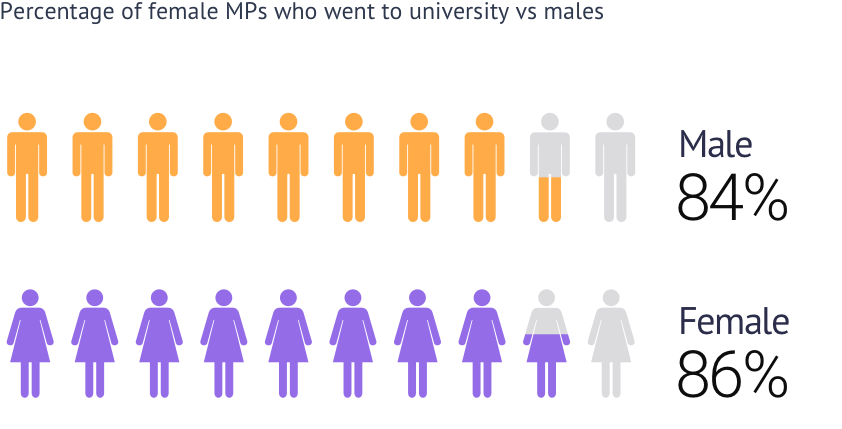 vs MPs before the election

How many MPs went to Oxbridge?

Interestingly, although the number of MPs who have gone to university has dropped by just 1%, those who attended Oxbridge has dropped by 3%, from 22% to 19%. This shows that perhaps the supposed influence of Oxford and Cambridge graduates on UK politics is beginning to slip.

Percentage of MPs who went to Oxford or Cambridge; 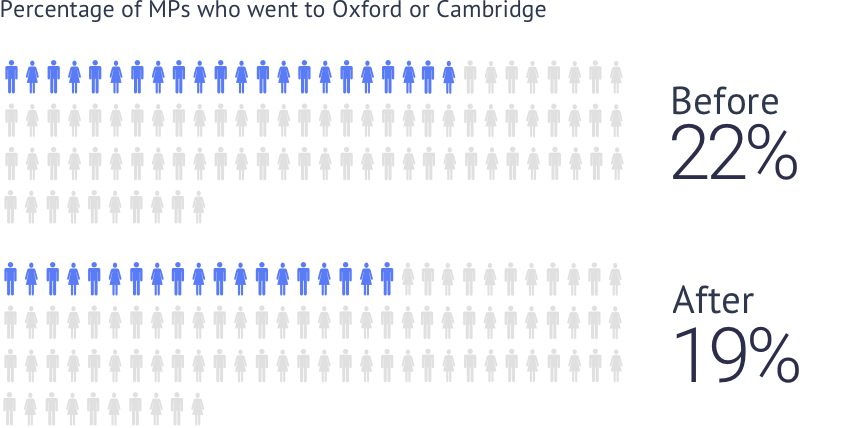 Which party has the most Oxbridge graduates?

Of the MPs that went to Oxbridge, it’s perhaps no shock to find that 70% represent the Conservative Party, up 12% from the previous government. Labour MPs make up the vast majority of the difference, representing 28%, with the other 2% coming from the Liberal Democrats. Although they now boast 48 seats, not one SNP MP attended either Oxford or Cambridge.

Which universities are most popular with MPs?

When it comes to the most popular universities that MPs attend, the top 4 remains unchanged following the election. Oxford, Cambridge, London School of Economics and Manchester still lead the way for providing the most MPs. Further down the list Glasgow, Edinburgh and Durham keep their places in the top 10, but there are now places for Birmingham and Exeter, with Aberystwyth dropping out.

The most popular choice of university for MPs who won seats in the 2019 election were;

The most popular choice of university for MPs before the election were;

What subjects do MPs study?

If you dream of becoming an MP, but don’t know which subject to study to get there, then these findings may shed some light. The most popular degrees studied by MPs before and after the election have changed slightly, with the top six remaining politics, law, economics, history and philosophy. Only the order has changed, with history now the 2nd most popular subject after politics, and law and economics slipping one place each.

Studee makes it simple for international students to find and apply to universities abroad. We’re the only website in the world with a multilingual team of NAFSA qualified advisors who speak to students, guiding them every step of the way from application to enrollment. Studee was co-founded by best friends Chris Morling and Simon Andrews in 2019. Chris has been dubbed in the global media as “Britain’s Best Boss” and recognized as one of the UK’s most successful tech entrepreneurs and philanthropists. Simon has worked in the global higher education sector for over 20 years, collaborating with universities all over the world to help millions of young people with their goals.